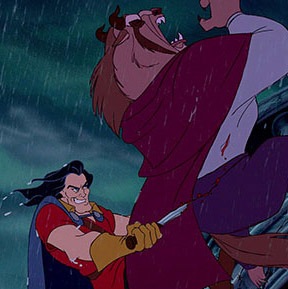 Just the good-looking hero brutally stabbing that ugly monster to death with a happy smile on his face... Wait a second...
"So here is a riddle to guess if you can
Sing the bells of Notre Dame.
What makes a monster and what makes a man?
Whatever their pitch, you
Can feel them bewitch you
The rich and the ritual knells
Of the Bells of Notre Dame."
— Clopin, The Hunchback of Notre Dame
Advertisement:

When an unsightly hero is juxtaposed with a handsome villain. Differs from a subversion of Beauty Equals Goodness in having this specific pairing. Expect the villain to play upon Genre Blind characters to make them turn against the hero and for An Aesop about the villain "being the real monster". This is fairly common in Beast and Beauty plots.

Often seen in series where Beauty Is Bad, and/or when True Beauty Is on the Inside.

Sometimes, the hero will be Ugly Cute, even if by accident.

More often than not, the ugly hero is a male and the good-looking villain is a beautiful female (though an ugly heroine and a good-looking male villain dynamic is rare, but not unheard of).