Dress-Coded for Your Convenience 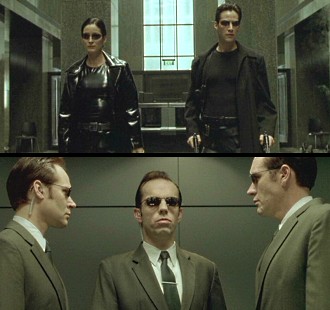 In The Matrix, a Badass Longcoat = Freedom Fighter, while Clean-Cut Hair, Earpiece and a Suit = Evil Tool of The Man.
Cool Shades are universal.
"There's a reason armies wear uniforms even though they make them easy to spot. Sometimes that's what you want. Uniforms suggest organization, power and numbers. These in turn inspire fear. And as any good operative knows, there is no more effective weapon than fear."
— Michael Westen, Burn Notice, "Hotspot"
Advertisement:

Basically, when you can tell sides in a conflict by what they wear. It doesn't matter the specifics of what they wear, just that one side has a distinctly different dress than the other.

This is actually quite common in fiction. One example is wearing a uniform for any military, either in fiction or Real Life (since you need to tell who to stab/shoot at). This also means this trope can be enforced by an actual Dress Code.

Other times, it can be cultural dress or the personal styles of the heroes and villains.

This can also apply even with Grey-and-Gray Morality. Just because you don't know which side is really the bad guys, doesn't mean you can't still tell one side from the other.

A Sub-Trope of Distinctive Appearances.

Not to be confused with Significant Wardrobe Shift.