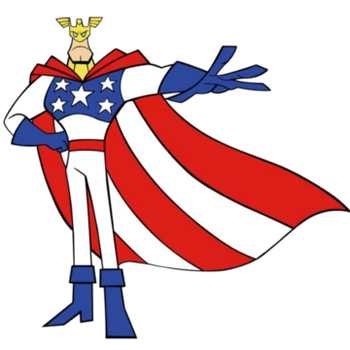 He clearly lives... In America!
"I don't know that I'd necessarily go out and buy a comic called 'Captain Belgium'."
— Paul Cornell, on US-based Marvel Comics' decision to cancel "Captain Britain and MI13", Comic-Con 2010
Advertisement:

Superheroes that are obvious about which country they live in, usually by name, Patriotic Fervor, or costume. The latter often overlaps with Wearing a Flag on Your Head.

If they also have powers and other aspects related to their countries, then this overlaps with Captain Ethnic.

Do not confuse Star-Spangled Spandex for being a sign of this trope.