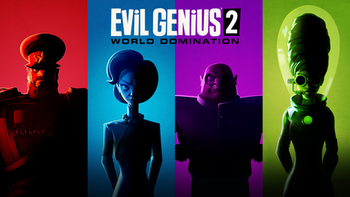 Now in four great flavors!
"If all the world's a stage, then I shall play my part
You may say it's cliché, but I say that it's an art
Every deck needs a knave to come and stack the cards
The world may be yours to save, but it's mine to tear apart
One button's all it takes to set the Earth a-quaking
Or is the world afraid and the planet started shaking?
You'd need tectonic plates to serve the schemes I'm baking
And the menu for today is some world domination!"
— The Stupendium, "FIEND LIKE ME | Evil Genius 2 Song!

Evil Genius 2: World Domination is a sequel to the 2004 cult hit Evil Genius, developed and published by Rebellion, who acquired the rights to the IP when the original studio Elixir closed in 2005.

Evil Genius 2 is a satirical "spy-fi" lair builder where you take the role of one of four villains working to take over the world. The game has separate campaigns for each villain and the style of the campaign favors each one's traits of offensive power, subtle social trickery, scientific domination, or a mixture of all three. The game promises to provide greater variety in playthroughs over the original title with both the unique flavors of the new Geniuses as well as offering the player one of three different islands to choose to build up in the campaign and more options in how to reach their ultimate goal of building their own Doomsday Device and bringing the entire world to its knees. The game also retains the same comical tone of the original title as well.

, as well as smaller snippets on the game's social

. The game was later announced to be ported to consoles sometime in the winter of 2021.

Since world domination is the end goal, Evil Genius 2 ends with your chosen Genius victoriously grasping the Earth in their hand, with it having a different appearance depending on the Genius. In Red Ivan's case, the Earth is on fire and wrapped in metal banding.

Example of:
Got the Whole World in My Hand

Since world domination is the end goal, Evil Genius 2 ends with your chosen Genius victoriously grasping the Earth in their hand, with it having a different appearance depending on the Genius. In Red Ivan's case, the Earth is on fire and wrapped in metal banding.