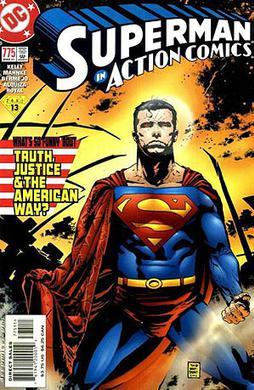 "What's So Funny About Truth, Justice and the American Way?" is a Superman story written by Joe Kelly with pencils by Doug Mahnke and Lee Bermejo. It was first published in Action Comics #775, March, 2001.

To understand what drives this story, we must learn its context. Back in 1999, a comic called The Authority was getting quite good sales and critical appreciation. The series was however noted for the unabashed hyper-violence and psychopathic behavior of its protagonists. Aroud this point, the comic's publisher, Wild Storm, was being bought by DC Comics. Thus, The Authority was running in direct competition with DC's Big Blue Boy Scout. As The Dark Age of Comic Books chugged on, one question was on everyone's minds: in an era when the Authority and its incredible violence was popular, was there room for a Nice Guy like Superman and his Thou Shalt Not Kill rules or should Superman adapt to the times?

The story starts with Superman rushing to Tripoli as the news reports a terrorist attack is occurring. However, when he gets there, the scene is absolute carnage: the entire city in flames and the attacker, a gigantic cybernetic gorilla, is torn apart and lying dead in the wreckage. The cause of this was the Elite, a group of four metahumans who believe the best way to deal with anyone and anything threatening them is by all-out murder. As the story goes on and the Elite keep dealing with criminals in a consistently bloodthirsty way, people like reporter Jack Ryder celebrate them and the casual citizen finds their quick and simple methodology the best thing around while regarding Superman as "lame" note this was also a complaint that was popping up about Superman as a character in Real Life for a few years before the original publication of this story, the Man of Steel must decide if his ways are no longer worth fighting for or if there is another way...

The story is considered one of the quintessential Superman stories, showcasing the reason why a character like Superman is still needed when it's quite easy to lose yourself in simplistic violence when nothing is there to check your power. The Elite and its members would appear in other titles for a few years: a new Elite forming known as the Justice League Elite that lasted for about a year, Manchester Black would become a somewhat important Superman foe through the early 2000s and make a return in DC Rebirth. The storyline would inspire an Animated Adaptation, Superman vs. the Elite, which was also written by Joe Kelly, while a storyline in Supergirl (2015) would involve the Elite.