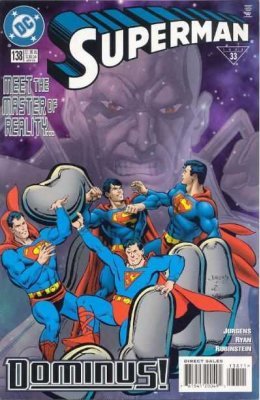 The Dominus Effect is the unofficial name of a story arc in the Superman comic book titles that ran through 1998, the 60th anniversary for the title character, beginning with the one-shot Superman Forever which closed out the Millennium Giants story arc as well as the Nineties' version of Superman Red/Superman Blue. In this story arc, Superman finds himself in four different realities at the same time: the Golden Age period of 1938, the Silver Age period of 1968, the Bronze Age period of 1978 (also called "Polyesteryear"), and the future age of 2999. In all four realities, Superman meets a young white-haired girl who tries to tell him about what's going on, and soon he finds out that the little girl is actually Kismet, the cosmic entity who is being sought after by another cosmic entity known as Dominus.
Advertisement:

The comic issues that were part of this story arc are: