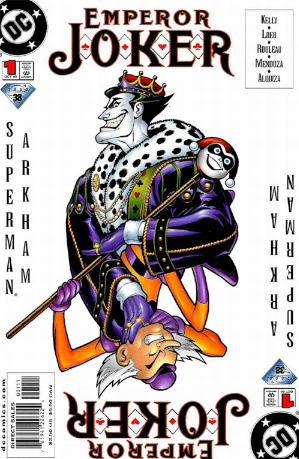 It's an average day in Metropolis: Superman breaks out of Arkham Asylum, overseen by Solomon Grundy, Lois Lane is the richest, vilest, and baldest woman in (and owner of) the city, and Bizarro #1 is the city's most beloved (and destructive) hero.

Well, it turns out that this is what happens when Mr. Mxyzptlk accidentally gives most of his power to the Joker, who creates a mind-bendingly odd world for giggles so that he will be able to kill Batman over and over and over again. Of course, in doing so he's risking tearing the fabric of reality apart at the seams, but when has he ever worried about that?

What started out as a mind-boggling inversion of everything Superman knows to be true turns into a race against time to stop the Joker's reality warping and get the associated powers back to their rightful owner.

Emperor Joker first appeared in the main Superman titles published throughout the latter half of the year 2000, with contributions by several writers and artists.