Wipe That Smile Off Your Face 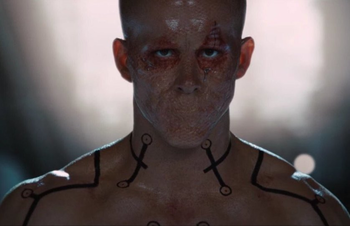 More like the Merc with No Mouth.
Neo: You can't scare me with this Gestapo crap. I know my rights. I want my phone call.
Agent Smith: Tell me, Mr. Anderson...what good is a phone call if you are unable to speak?
[Neo's lips melt and seal his mouth shut]
— The Matrix
Advertisement:

A character's mouth is removed by some means. Only the mouth. Any further and they would become The Blank. As the old saying goes: see no evil, hear no evil, speak no evil.

The most common gesture accompanying this is to close an imaginary zipper in the air, maybe even accompanied with a zipper sound, and the mouth of the victim close up and stay shut. There are other variants, of course, most quite horrifying.

Related to Eyeless Face and The Noseless. Not quite as catastrophic as And I Must Scream (no actions or communication). Compare with No Mouth, an animation style where characters are drawn without mouths, and Mouth Stitched Shut, in which the lips are sealed by brute force rather than erased.