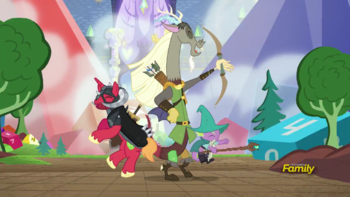 "In a World… where evil reigns supreme, a small band of warriors stands tall against the darkness. This is... Ogres & Oubliettes."
Special Guest Star: John de Lancie as Discord
Written by Nick Confalone
Advertisement:

Fluttershy packs for a trip to Yakyakistan while Discord begs her to bring him along. Fluttershy refuses, saying that Princess Celestia is taking them on a good-will trip for one night, and it would be better if Discord stayed. She suggests hanging out with Spike and Big Macintosh, but Discord is hesitant. After seeing the Mane Six off at the train station, Spike and Big Mac invite Discord to hang out, but he still says "no." As they leave, they mention in passing that it's a "Guys' Night", which suddenly interests Discord, causing him to change his mind and agree to hang out with them.

That night, Discord arrives at Twilight's castle, planning on going out on the town for some fun. But, Big Mac and Spike are planning on staying in to play Ogres & Oubliettes, a tabletop role-playing game. Spike is a wizard, and Big Mac is a warrior, and they invite Discord to create a character and join their campaign to stop the evil Squid Wizard, or "Squizard". Discord half-heartedly participates until, in-game, his character casts a spell that backfires, which makes Spike and Big Mac start laughing. Suddenly angry, Discord snaps, sending the three of them into a night club. Despite Spike's protests, Discord tries to carry on without them until Spike demands to restart the game. Fed up, Discord does indeed restart the game with himself as the game master, sending Spike and Big Mac into a world where their characters are real, but so is their pain from battle damage.

The Squizard token arrives with a small army of skeleton archers, which fire on Spike and Big Mac. They run into a cave, where the army surrounds them. Discord sarcastically asks if this is what Spike wanted, to which Spike replies that he only invited Discord because he and Big Mac felt sorry for him. Discord snaps them back to the castle, where Spike reveals that they know that Discord practically begged Fluttershy to go on the Mane Six's trip. So, they invited Discord to join their game so he wouldn't be alone. Discord leaves, gradually getting more upset at the revelation. Spike and Big Mac attempt to continue without Discord, but decide to give him another chance. Calling out to Discord to get him to come back, Spike admits that playing as their characters was a lot of fun. He tells Discord to bring it to life again, only toned down a bit.

The Mane Six arrive back from Yakyakistan, walking into Twilight's castle, only to find Spike, Big Mac and Discord battling the Squizard and his army of life-sized cardboard tokens. Twilight suggests they leave to let them finish, but Pinkie Pie and Rainbow Dash join in the Guys' Night, jumping in to join in the fun.