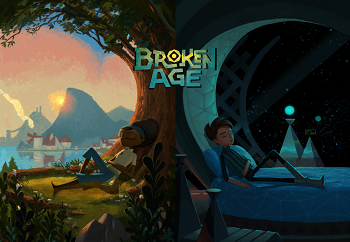 Broken Age is an Adventure Game by Double Fine released for the PC, with the first act released in January of 2014 and the second in April 2015. It is notable for raising more than $3.3 millionnote about eight times the amount it asked for in crowd funding via Kickstarter, starting a trend among video game developers in The New '10s to use Kickstarter to fund their own passion projects.

The game features two separate stories which are played in parallel; although there is little direct connection between them, the two stories share strong thematic elements. Both stories feature a teenager — one a boy, the other a girl — who find themselves in situations they desire to escape.

The boy, who is named Shay Volta, lives alone in outer space on the Bassinostra, an "incubator vessel" that carried him to safety when his world was dying. His entire life so far has been spent under the watchful eye of the ship's maternal AI, who has coddled, nourished, and entertained him through the years, shielding him from potential dangers that lurk beyond the pod bay doors. However; Shay is starting to become suspicious of his extremely fussy adoptive parent's true motives, and he has a growing longing to see the outside world and face some real danger.

The girl, Velouria Beastender Tartine ("Vella" for short), has just been selected for a "great honor": her participation in her village's highly esteemed festival for the Eldritch Abomination "Mog Chothra" (the latest in a long distinguished line of Mogs) as one of the maidens that will potentially be devoured by the monster in exchange for the monster leaving the town in peace for another 14 years. Faced with this dire situation, Vella finds herself coming back to a single question: "What if we actually tried to fight the monster?"

Both Shay and Vella will be required to make a fateful decision that will greatly affect their lives, and the world around them.

A PlayStation 4 version with both acts was released on April 28, 2015, and the second act was released on the same day for PC, Mac, and Linux, along with a boxed version published by Nordic Games.