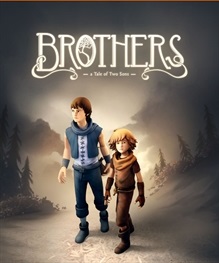 A man, clinging to life. His two sons, desperate to cure their ailing father, are left with but one option. They must set out upon a journey to find and bring back the "Water of Life” as they come to rely on one another to survive. One must be strong where the other is weak, brave where the other is fearful, they must be... Brothers.
Advertisement:

Brothers: A Tale of Two Sons is a video game developed by Starbreeze Studios. It was released for Xbox Live Arcade, Steam and Playstation Network in August 2013. It is the video game directorial debut for film director Josef Fares.

The story is simple: a pair of brothers, who lost their mother to a tragic boating accident amidst a terrible storm, are asked by the local town healer to seek out a mysterious tree. The tree is the key to saving their father, who is deathly ill.

The entire gameplay is the journey the two brothers take through their world. Enemies are rare. More often, the brothers need to use their wits and work together to progress. The player controls both brothers at once, using only movement controls and a single interaction button for each brother.