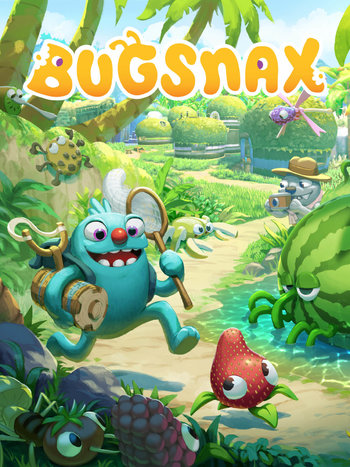 "You are what you eat!"
Kinda bug and kinda snak/Try to catch them in your trap
Feed somebody and you'll see/we are whatever we eat!
Find them hiding in the sand/Tearin' up a ketchup patch
Come to Snaktooth Island and discover:
It's Bugsnax!
— Kero Kero Bonito - "It's Bugsnax!"

Bugsnax is an indie adventure and Mon game released in 2020 for the PC, PlayStation 4, and as a launch title for the PlayStation 5. Developed and published by Young Horses (the same minds behind Octodad), Bugsnax follows the same bizarre, absurdist humor that they built upon with their first title.

In a world of fuzzy monster-like people called Grumpuses, you play a news reporter who receives a film strip in the mail from Elizabert Megafig, an explorer who beckons you to a place called Snaktooth Island, where the titular bug-food creatures dwell, so that you may document them.

Unfortunately for you, upon arriving there you learn that she's disappeared on an expedition, with everyone who followed her scattering. This leads you on a quest to rebuild the abandoned town within the island, reunite its scattered denizens, and uncover the mystery behind her disappearance with their help.

The game is played entirely in first-person, with a heavy emphasis on bug-catching through the use of various contraptions that you'll acquire from other Grumpuses. Once bugs are caught, you can feed them to the townsfolk, and make one of their body parts transform into the corresponding Bugsnax you just fed them.

During Sony's October 2021 State of Play event, a free expansion titled The Isle of BIGsnax was announced, including new features such as giant Bugsnax, Bugsnak hats, and the ability to decorate your own hut. The game (and expansion included) would also release for Nintendo Switch, Xbox One, and Xbox Series X|S on April 28, 2022.

That's why I never eat anything with a face.