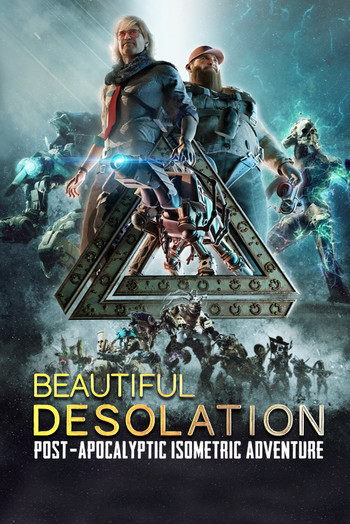 Beautiful Desolation is an isometric Sci-Fi Adventure Game from 2020, made by THE BROTHERHOOD, a South-African indie development team of two brothers. Like their previous game, Stasis (with which this game does not share a universe, unlike the free game Cayne), the game was funded through a successful Kickstarter campaign.

The game opens in 1986 of an Alternate History where a mysterious alien structure known as the Penrose appeared in the sky above South Africa ten years previously, disrupting civilization and significantly altering the course of technological development — and, consequently, political developments — since then. The protagonist, Mark Leslie, cajoles his brother, Don, into flying a helicopter to the restricted Penrose that continues hovering above in order to research the structure's secrets only to find himself and his brother, along with a Robot Dog, blasted centuries into the future. Now stuck in a post-apocalyptic world, Mark must figure out what has happened and try to find a way to return to his own time.