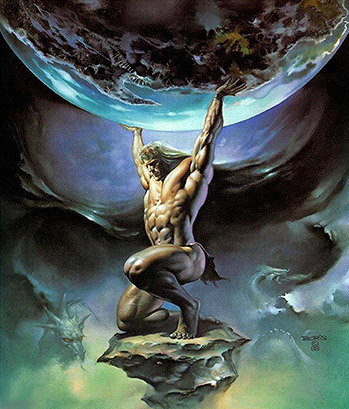 He's got the whole world in his hands.

"Lafrenze, don't forget. You are the last guardian of the door that protects this world from the dead that dwell in Hades. You cannot ever break the barrier of purity."
— "The Witch and Lafrenze", Elysion
Advertisement:

Sometimes the Damsel in Distress isn't just a pretty and helpless Love Interest in need of rescuing; sometimes she's also a vital support beam for the continuing existence of a safe and happy world. Kinda makes dating awkward.

Much like a Virgin-Powered Containment Field to a nasty Sealed Evil in a Can, the Fisher King (well, queen) of a kingdom, or a human Cosmic Keystone that makes sure the sun rises each morning, the heroes' Woobie is responsible for maintaining the Balance Between Good and Evil firmly in the Ghibli Hills side as opposed to Mordor.

Of course, this makes them the target of so many kidnapping plots even the parodies have become a Dead Horse Trope. Note that just plain killing the Barrier Maiden is rarely an option — either the villain becomes infatuated with her or he wants to Break the Cutie to The Dark Side and turn her into an Apocalypse Maiden, or there's a complex Black Magic ritual needed before he can destroy or steal her power, or simply killing will just make her reincarnate elsewhere... the list goes on and on.

The life of a poor Barrier Maiden is pretty sucky to boot (even more so than for a superhero's kid). She's usually treated as a MacGuffin instead of a person, is expected to make a Heroic Sacrifice if victory is on the line, and is usually chained to a temple or altar as part of her duties. As a job, maintaining the Containment Field or being a Cosmic Keystone usually isn't pleasant either: if the evil is becoming stronger or the Eldritch Abomination is weakening reality, she might end up dying either holding up the roof or when the barrier breaks.

Expect the Barrier Maiden to be a White Magician Girl, All-Loving Hero or The Pollyanna. Male examples are pretty uncommon, but Atlas at least is a good one, making this Older Than Feudalism. See also MacGuffin Super-Person. Conditioned to Accept Horror could sometimes overlap. Not to be confused with the Barrier Warrior, but they may occasionally overlap. Also not to be confused with a Maiden Barrier, which can also make dating awkward. Compare with Load-Bearing Boss and Sealed Inside a Person-Shaped Can. Contrast Apocalypse Maiden.