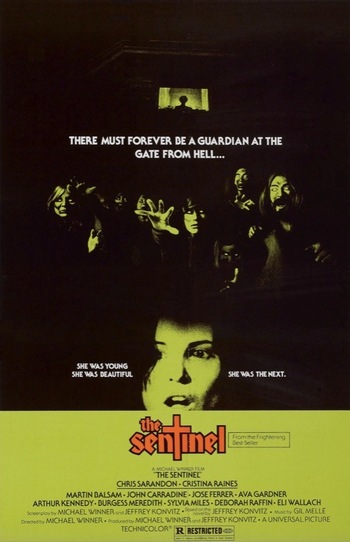 A 1977 horror film directed by Michael Winner, adapted from the novel of the same name by Jeffrey Konvitz (who also produced the film and wrote its screenplay adaptation with Winner). It stars Christina Raines and Chris Sarandon, with a supporting cast including Martin Balsam, John Carradine, José Ferrer, Ava Gardner, Arthur Kennedy, Burgess Meredith, Sylvia Miles, and Eli Wallach.

Supermodel Alison Parker (Raines) moves into a nice Brooklyn Heights apartment, and finds out the tenant on the top floor of her building is a blind priest, Father Hallerin (Carradine). Pretty soon, she starts having strange physical problems, trouble sleeping, and flashbacks to her attempted suicide.

Not to be confused with the 1990s TV show, or The Sentinel (2006) starring Michael Douglas and Kiefer Sutherland.