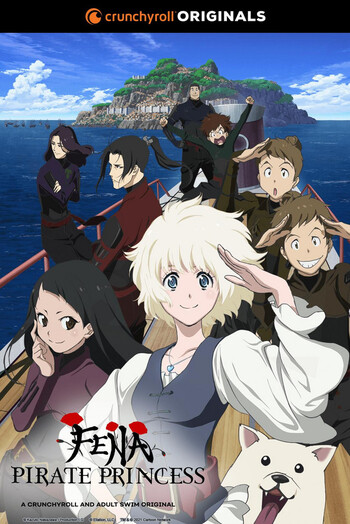 Fena: Pirate Princess is an anime series produced by Production I.G and directed by Kazuto Nakazawa.

10 years prior, Fena Houtman was inbound on a ship with her father and other friends, when it suddenly was attacked. In the ensuing chaos, her Childhood Friend Yukimaru takes her to safety on a boat and sends her adrift to escape from the attack, but not before listening to her father telling her to "Go to Eden!" right before seemingly dying in an explosion.

In the present day, Fena has been raised in the sleepless island of Shangri-la where there is no hope of becoming anything more than chattel; to be used and discarded by soldiers of the British Empire. On a fateful night, as all the quirky plans she had planned to escape fall through by technicalities, she is suddenly rescued by former subjects who served her and her father. Soon, it's revealed that she must go on a journey to the mysterious "Eden" with an entourage of "pirates" - whom among them has her childhood friend Yukimaru in the group, acting more aloof than he used to be - to find out why her father was seeking the mysterious land in the first place.

The series aired from August 15 to October 24, 2021, with its sub version streamed on Crunchyroll, while its English dub aired on Adult Swim's Toonami block. The series began airing in Japan on October 10, 2021.