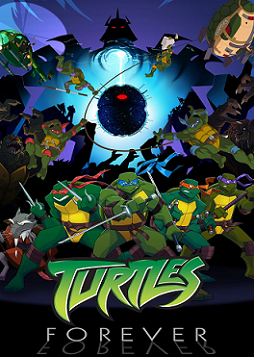 "Two turtle teams from two turtle worlds, different in so many ways... but deep down, there are similarities."
—The Shredder
Advertisement:

What do you get when the 2003 Ninja Turtles meet their counterparts from the original cartoon series? This special 80-minute movie released in 2009, which acts as a celebration of the franchise's 25th anniversary, a love letter to the fans, and as the 2003 cartoon's Finale Movie. The film has a strongly obituary/funereal vibe as well (particularly during the last 10-15 minutes), and could serve as a graceful and cathartic end to the franchise as a whole, for viewers who are upset about Eastman and Laird's sale of creative rights.

An accident in the Technodrome sends it and the Turtles from the original cartoon to the 2003 Turtles' universe. As the 2003 Turtles try not to get too annoyed by their counterparts, 1987 Shredder and Krang make the biggest error of their lives when they free the 2003 Utrom Shredder (Ch'rell) from his exile. Utrom Shredder eventually takes over the Technodrome, and decides that if he wants to destroy the turtles, doing so in one universe won't be enough...

See also the main Teenage Mutant Ninja Turtles page, the page for the Mirage comic book series, and the pages for the first and second animated series.

"The master will be pleased!"

Don't think he will.

"The master will be pleased!"

Don't think he will.