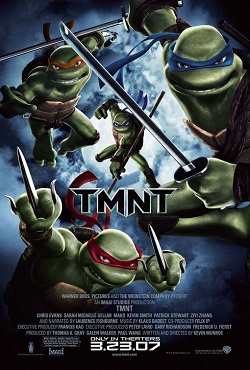 After training in Central America at the request of Splinter (Mako), Leo (James Arnold Taylor) returns home to New York and reunites with his brothers Mikey (Mikey Kelley), Donny (Mitchell Whitfield) and Raph (Nolan North), who have grown estranged from one another following their last adventure.

Meanwhile, super wealthy mogul Max Winters (Patrick Stewart) has gained possession of four stone statues, one of which was retrieved for him by April O'Neil (Sarah Michelle Gellar). We learn that Winters is a warlord made immortal thousands of years ago upon contact with a rift in dimensions and that those statues are his generals, who were transformed into living stone. Winters also has hired guns in a reformed Foot Clan led by the mysterious Karai (Zhang Ziyi). As all of this is happening, monsters are starting to appear all over the city.

The Turtles must overcome their personal differences and become a whole once again to get to the bottom of things and quite possibly save the world.

Example of:
Fighting the Lancer