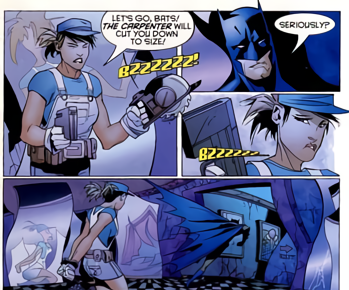 Is there anything sadder than a Batman villain with Puppy-Dog Eyes?
"I don't know whether we should pound him or buy him an ice cream cone."
— Michelangelo on Baxter Stockman, Teenage Mutant Ninja Turtles (2012)
Advertisement:

A potential villain who is consistently a failure or never gets the respect that he thinks he deserves, and may even be angry that the heroes don't take him seriously.

He or she may not necessarily be entirely inept or have a laughably mild idea of what counts as villainy. Villain Decay is usually too simple an explanation. This is sometimes a relative situation, and the hero's Rogues Gallery just happens to include people more showy, better financed, or just plain scarier than him. These guys are why people are found Rooting for the Empire. A defining feature of such a villain is his gullibility: they are more often than not pitted against a Trickster who easily bamboozles them and leads them on their defeat, while it is obvious to the viewers that they should know better than listening to and believe their intended victim. A considerable number of them also tend to be Klutzes who are likely to fall in their own traps thanks to poor judgement, underestimating their foes to a ludicrous extent and/or failure to think ahead or pay any attention to their surroundings. And it is a usual way to showcase their stupidity by making them screw up their own plans and even die or get injured due to such mistakes in more realistic and grittier works.

This does not mean that he doesn't bear animosity; that's a Punch-Clock Villain. He's probably jumping at the opportunity to outdo his rivals and the hero. But there is something about his perseverance or attitude about the whole thing that is just short of sympathetic.

May also be a Determinator out of necessity or overlap with Draco in Leather Pants. If they get even more pathetic in regard to the hero, Unknown Rivalry looms. Just watch out, they may suddenly turn out to be a Not-So-Harmless Villain and succeed or come dangerously to succeeding with their goals in which case they will probably lose the sympathetic part and likely cross the Moral Event Horizon. After all, their appeal lies in how hopeless their attempts are.

Video Game versions of this trope frequently overlap with the Goldfish Poop Gang if they are just as pathetic in actual battle as they're treated by the story. They may maintain threat status if Conservation of Competence allows them to keep competent supporters.

The Evil Counterpart to Failure Hero. Arguably a Sub-Trope of Boisterous Weakling. Super-Trope to The Family for the Whole Family, which specifically requires the villain to be incompetent and their likely threat level sans said incompetence to be that of a Knight of Cerebus. A character who acts like a villain while genuinely not wanting to do anything truly evil is a Harmless Villain.

Contrast Complete Monster, where we instead have an utterly nasty, dangerous, and unsympathetic villain. Also contrast Hate Sink, who is made to be as detestable as possible and someone you want to see defeated.

The Life of the rat Grey

Grey is a mouse-like rat who usually antagonizes the recurring insects. Kind of like Wile E. Coyote, he is very inept at catching his prey, fails in comical ways, and is left starving while desperately hungry up until he formed a group in the "Life of a Rat" episode, he continues plotting against them regardless.

The Life of the rat Grey

Grey is a mouse-like rat who usually antagonizes the recurring insects. Kind of like Wile E. Coyote, he is very inept at catching his prey, fails in comical ways, and is left starving while desperately hungry up until he formed a group in the "Life of a Rat" episode, he continues plotting against them regardless.