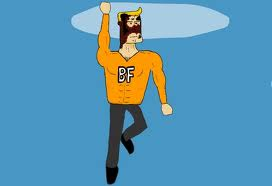 "I may have a burnt face, but that doesn't mean I can't fight crime!"

Crime is a shit that needs wiping up!

From the creator of Salad Fingers and Spoilsbury Toast Boy comes a (far less creepy) Flash cartoon about the adventures of the epynonmous hero, who possesses a badly burnt face, some Stock Super Powers, and... not much else. His life is miserable, and (with the exception of one crazy stalker) most everybody hates him. His foes consist of the equally ineffective Bastard Man and Man-Spider, and much of the cartoon follows our hero as he battles the forces of "evil".