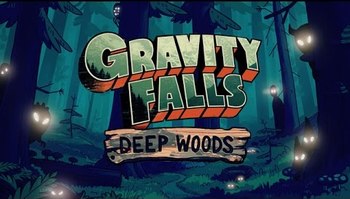 How about we go for a walk into the dark part of the forest?

Gravity Falls: Deep Woods is a fanmade series of full-length animatic episodes that follow the events of Gravity Falls. They are put together by MysterySeeker

and a team of various amateur artists and voice actors. As stated by MysterySeeker, the first three episodes of the series will actually take place in between the events of the show. The following episodes will take place in the next summer, and will incorporate an overarching story. The first three, however, will be simple one-offs.

Due to this being fanmade and not containing network restrictions of a TV station, every episode is written and made to be as long as it feels necessary to be. This means episodes won't be restricted to 22 minutes like a normal episode of Gravity Falls would be. Of course, this means an episode could be longer or shorter than that given time.

The first episode, Quest for the Northwest, has been released in two parts, the first one

in January 2017 and the second one

in June 2017. It takes place after the events of The Stanchurian Candidate and before the events of The Last Mabelcorn. The gnomes are revolting against Jeff, because he's a terrible leader, and give him an ultimatum: Either he finds them a new queen by sundown or they will depose him. At the same time, during the parade honoring the election of Mayor Cutebiker, Dipper and Mabel help Pacifica escape her parents' watch and have fun.

, Deep-Rooted Misunderstanding, was released October 31st 2018. The episode takes place in parallel to Quest for the Northwest. During one of his squabbles with his brother, Stan ends up accidentally releasing the Mother Plant, a plant-like monster. While Dipper and Mabel have gone to the Northwest Parade, it's now up to Stan and Ford to get rid of the monster.

The next part is called the Tales from Weirdmageddon. It's a series of shorter episodes. Each will tell the unheard tales of the Weirdmageddon survivors. The first mini-episode

was released June 18th 2020 and narrates Dipper's Tale From Weirdmaggedon.

For more information, you can look at the project's tumblr page

where all the videos have been posted.

Quest for the Northwest provides examples of:

The Tales From Weirdmageddon provide examples of: