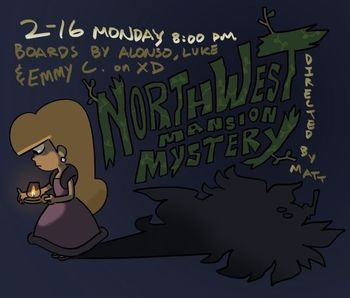 "Generations locked away, my revenge shall have its day!"
Advertisement:

The Northwest family are preparing for their annual party, but a mysterious force is causing things to fly around. Because of his budding reputation for dealing with weirdness, Dipper is asked by Pacifica to solve the problem before the party is ruined. While he has no interest in helping the Northwests, Dipper is convinced to do so in exchange for invitations for Mabel, Candy, and Grenda.

At the party, the girls fawn and fight over handsome tween aristocrat, Marius von Fundhauser. Meanwhile, Pacifica takes Dipper to the room where the strange events have been happening. There, they encounter a terrifying lumberjack ghost with a flaming beard. After a horrific chase leading to a secret room, Dipper traps the Ghost in a silver mirror. Caught, the Ghost reveals his origins;

In life, the Lumberjack was one of many commissioned by the Northwests to build their opulent mansion. Because the chosen site was so dangerous, the Northwests promised to hold a party for the entire town as an incentive. But when the mansion was finally built, the Northwests just shut the gates and kept the townsfolk out. The Lumberjack was caught in a mudslide caused by the deforestation, but before dying, swore that if the Northwests refused to honor their promise after 150 years, he would unleash a terrible vengeance.

Dipper, though royally cheesed off that the Northwests used him to escape ghostly justice without fulfilling their promise, still performs the exorcism. The Ghost clearly suffers from Revenge Before Reason, and the young Pines knows that Evil Is Not a Toy. However, the Ghost manages to escape by heating the mirror, causing Dipper to drop and break it. Now free, the Ghost attacks the party, turning guests into wooden statues. Dipper realizes that the Ghost can only be stopped if a Northwest opens the mansion gates, and goes to find Pacifica.

Dipper finds Pacifica in the secret room, having hit the Despair Event Horizon; the room they found was where her family has kept evidence of their misdeeds hidden away. Dipper explains what's going on outside, and assures Pacifica that she doesn't have to be as bad as her predecessors are. Back at the party, the Ghost decides to burn the mansion down. Dipper tries to fight him, but is turned to wood. With Dipper's words and sacrifice weighing on her, Pacifica opens the mansion's gates, vowing to fix her family's broken name. With the pact finally fulfilled, the Ghost undoes his curse, and parts with these words; "Pacifica, you are not like the other Northwests. I feel…lumber justice."

The townsfolk of Gravity Falls swamp the party. Mabel, Candy, and Grenda make up, and it turns out that Marius has become rather taken with Grenda's forceful nature. Old Man McGucket finds Dipper, and reveals that he's fixed the laptop belonging to the Author. After making some calculations, he's discovered something terrible! But Dipper, exhausted after almost dying twice in one evening, decides that whatever McGucket's found, it can wait until the morning. But McGucket isn't so sure; according to the laptop, whatever's going to happen will occur in T-minus 21 hours!

Meanwhile, Agent Powers and Agent Trigger, having infiltrated the party, have their own meeting; They too have picked up on something, and have decided to take action. "It's go-time!"