Forced into Their Sunday Best 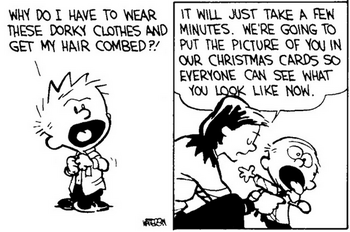 Son: Why do I have to wear this?
Mother: Because the Queen has come of age! It's coronation day.
Son: That's not my fault!
— Frozen
Advertisement:

Characters (usually children) are forced to wear smart-looking clothes (their Sunday best) and hate it. They usually change out of these clothes as soon as possible.

The term "Sunday Best" refers to Western Christian society where people often dress up in tidy clothes for the Sunday service. This was far more common in the past when people only had limited clothing, they had the set they wore in the week and their Sunday best for special occasions (and Sundays).

If related to cartoon characters, may be one of the few exceptions to their Limited Wardrobe. This trope, however, is about anyone being forced to wear smart clothing for an occasion.

The reasons for this hate can include:

Some of these reasons are interchangeable. Truth in Television for many kids (and occasionally adults) at formal events, like weddings.