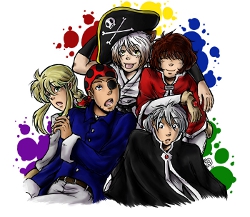 Pirates, ninjas, and other cliches, wholesale.
"Elator's Archetype though, pegs him as being able to stumble his way through any situation none the worse for wear."
— Sal (who could be referring to anyone in the cast)
Advertisement:

Dubious Company is an adventure comedy comic written by Ben Hsu (AKA Tagalong) and drawn by Elaine Tipping (AKA Tria).

It follows Captain Walter Herindale and his best buddy Tiren as they build an assorted quirky crew in order to do... something, mostly heavy drinking. All the while they spoof and play with every trope, Cliché, and genre they come across. Oh, and dealing with Emperor Kreedor's Elite Guards.

note  Although since the site can sometimes be very slow (to the point of triggering 504 errors instead of loading properly) and — considering the webcomic is finished — probably won't stay up forever, a Wayback Machine link has been provided

This webcomic contains examples (by story arc) of:

open/close all folders
Comic In General
Shipwrecked In Paradise
Of Rescues and Mutinies
Advertisement:
Traitor In Our Midst
Get The Kitty
The Empire Strikes... Next?
Izor's Amazing Plan (Of Amazement)!
On The Middle of Nowhere
Back To School
Festival Of Veils
Star Something? (Title pending)
The Search for the McGuffins!!
The Evil Tower of Evil
Supplemental & Filler