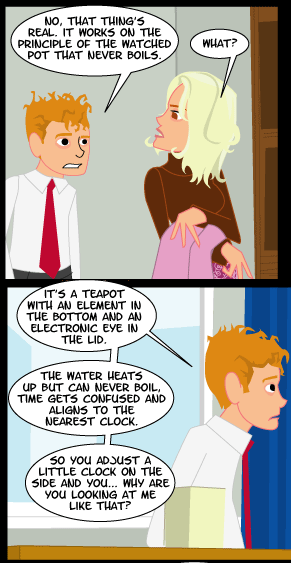 No, reading the webcomic this was from will not provide any sort of explanation.
"This is my timey-wimey detector. It goes ding when there's stuff."
— The Doctor, Doctor Who, "Blink"

There's "hard" science fiction, which adheres only to what is currently known or theorized. And then there's "soft" science fiction, which usually either offers little to no explanation beyond "it's a time machine!/ray gun!/clone!, etc", or makes use of Techno Babble, which is when the writer gives a reason that sounds science-ish and trusts the Willing Suspension of Disbelief to take care of the rest.

But there is some science fiction, usually on the "softest" end of the scale, that deliberately uses what is obviously nonsensical science, with no illusions about the audience ever taking it as anything but a joke. It may explain the scientific principles on which the phlebotinum works, but the principles are so outlandish that the audience has to shrug and say, "it's comedy".

Oftentimes, Noodle Implements are needed to harness nonsensoleum. Other times, Achievements in Ignorance are the catalyst that allow nonsensoleum to work, and it will stop working once the characters realize that it shouldn't be possible. If they can still do it despite recognizing that what they're doing should be impossible then it's Beyond the Impossible. If a person has powers that run off of this trope then they may be using Literal Metaphors to make it work.

Can be seen as an acknowledgement of the Rule of Funny. Compare Insane Troll Logic, which is logic that is not supposed to make sense. If the explanation is used to cover a plothole and creates an even bigger plothole, it becomes a Voodoo Shark.

Sometimes justified by The Spark of Genius or Psychic Powers.