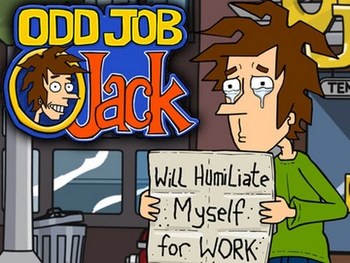 Odd Job Jack is a Canadian animated situational comedy show from Smiley Guy Studios about Jack Ryder, the master of mediocrity. He works at a temp agency where every episode he is assigned a new job. At home, he lives with his corporate mother, drug-addicted grandmother and activist sister. His friends are the agoraphobic, wanted-for-cyber-crime Leo Trench and the musically-inclined, dorky guy Bobby Lee.

The show began as a Flash web series, but was quickly discovered and put to television on The Comedy Network (incidentally, an origin shared by another Comedy Network cartoon, Kevin Spencer). Four seasons have been made, out of which only the second has been released to DVD. Seasons 2-4, however, was available for free viewing through Hulu before being pulled from the service.

Has nothing to do with the Goldfinger henchman.