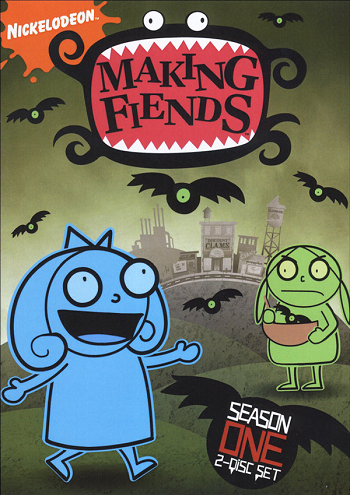 Making Fiends is an animated television series, created by Amy Winfrey. It is a spin-off of an online series of the same name and started airing on Nicktoons Network on October 4, 2008.

The show revolves around the life of Charlotte, a sweet, innocent little girl who is the new girl in the town of Clamburg (she used to live in Vermont, according to the first webisode). Charlotte is also incredibly naïve, and is unable to think badly of anyone around her. Charlotte quickly makes "friends" (or so she thinks) with Vendetta, a horrid little girl who makes monsters, or fiends, through baking. Vendetta cannot stand Charlotte's happy go lucky nature, and will often go to great lengths to destroy Charlotte (or at least get her out of the way for a little bit). These attempts inevitably backfire, usually resulting in Vendetta doing great damage to herself. When they do succeed, Charlotte can only see the bright side of her situation and will become more annoying than usual, usually turning the episode's featured fiend into a friend. Everything is back to normal by the end of the episode.

Vendetta, due to her fiend-making abilities, appears to have the entire town at her control. As such, Clamburg is a bleak, dark and forbidding place.

The show seems to be cancelled at this point, as it has been more than 10 years since a new episode was aired, and even reruns of the show have stopped airing, aside from short marathons on the Halloweens of 2014, 2015, and 2016. Winfrey has stated that there are 7 more episode scripts on the FAQ

of her website for the show (which hasn't been updated since 2009), but it looks like Nick has no plans to make them.

Big Bunny is another web series by Amy Winfrey. It never had a chance of becoming a TV series, for various reasons.