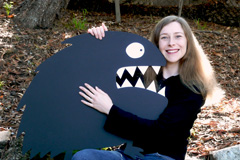 Amy Winfrey is an independent animator. She is the creator of a number of popular web cartoons.

Amy got her start in animation while attending UCLA as an English major. One quarter she took an animation class for fun. She liked it so much that after graduation she entered the UCLA Animation MFA program full time.

While at UCLA, Amy made a short 3D computer film called The Bad Plant, which won numerous awards including a Student Academy Award.

While attending UCLA, Amy worked as an animator on South Park. The first season was being produced in Westwood, only a few blocks from the UCLA campus. She later took a break from school to work full time on South Park: Bigger, Longer & Uncut.

She currently works as a director on BoJack Horseman, as well as its sister show Tuca & Bertie.

You can see them all on her official YouTube channel

Tropes common in her works: