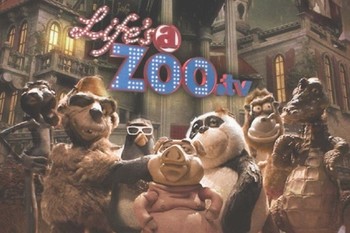 Hello, and welcome aboard Life's a Zoo.tv, the reality show that dares to ask the question, how real is too real?
— Claude, host of Season 1
Advertisement:

Seven anthropomorphic animals are put up in an elaborate mansion to compete in challenges from their host, being "extincted" (eliminated) one by one, until only one remains, and wins the mansion. For thirteen weeks, these seven houseguests have to avoid being extincted in whatever sick and twisted challenges their host throws at them, and more importantly, try not to kill each other... Oh, and Once per Episode, there's a music video.

Getting to know each other a lot more than they want to are...

If the descriptions of the characters didn't tip you off, this show is not for the kiddies.

The series originally aired on Teletoon's Detour block (the Canadian answer to Adult Swim) in 2008, where it ran for 2 seasons and a total of 20 episodes. Reruns later returned on the Internet when it became part of Shut Up! Cartoons' roster in 2013.

Compare to its fellow animated reality TV parodies, Drawn Together and Total Drama.