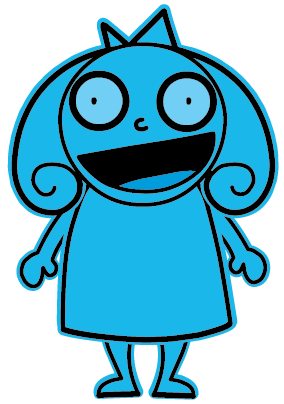 A happy-go-lucky blue girl from Vermont who defines The Pollyanna. She unknowingly makes Vendetta look foolish and incompetent, so Vendetta plots to kill her. Despite her naivete and obliviousness, Charlotte always avoids certain death. In case you haven't figured out yet, she drives Vendetta insane. Voiced by Amy Winfrey. 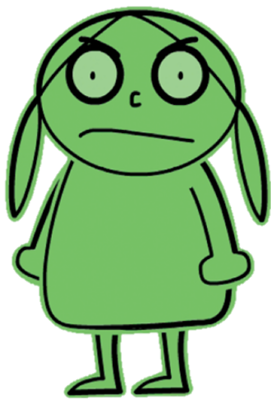 A wicked young girl who makes monsters, called "fiends", from a recipe book and uses them to take control of Clamburg. She spends her time tormenting the residents, especially her classmates, into submission. However, she is deemed foolish thanks to Charlotte's niceness and ditziness, thus her goal is to get rid of Charlotte whatever it takes. Voiced by Aglaia Mortcheva.

Grudge
A giant hamster fiend who works as Vendetta's sidekick. His role is to protect Vendetta, intimidate the students and give out physical threats. Voiced by Peter Merryman.
Scissor Fiend / Buttons II
A small black bird-like fiend with a beak that works like extreme scissors, cutting and slicing through anything. In the web series, this is the first fiend Vendetta makes for the intention of killing Charlotte.
Giant Kitty
A giant red cat, said to be the first fiend Vendetta made. Voiced by Amy Winfrey.

Rubella
A fiend who replaced Grudge as Vendetta's sidekick in episode 18, only appearing in the web series. The most human-like fiend in appearance, she resembles Frankenstein's Monster. She starts to view Vendetta as her friend. Voiced by Elissa Calfin.
Toupee
A talking fiend made to be Mr. Milk's toupee. The toupee fiend was made to convince Mr. Milk to kill Charlotte. Voiced by Fred Tatasciore

Charlene
Charlotte's grandmother in the TV series who owns a shop that sells candy and motor parts. She's just like Charlotte, only older. Voiced by Amy Winfrey.
Viktor and Violeta

Vendetta's parents in the TV series. They have been shrunken down to fit into a hamster cage. Voiced by Dave Wasson and Aglaia Mortcheva.

Charlotte's parents
Stated by Charlene to be astronauts. They may have actually died.

Mr. Milk
A beige man who's the schoolteacher of room 4, though he never gets the opportunity to actually teach anything. He's the most fearful of Vendetta, and has a red Toothy Bird keeping him in check. Voiced by Peter Merryman.
Marion
The nervous pale blue girl who sits next to Charlotte. She was the first to warn Charlotte of Vendetta. Voiced by Amy Winfrey.
Malachi
The first student to appear. He gives Charlotte dire cautions about Vendetta and her fiends, but she doesn't understand him and ignores them. He and his family are Puritans. Voiced by Peter Merryman.
Marvin
A tall dark green boy. He's easy to take advantage of, which Vendetta exploits. Once an Episode he'll exclaim "My [noun]!" because his possessions are constantly being taken away from him. Voiced by Peter Merryman.
Maggie
A Living Prop in the webtoon, the TV series shows us she's an Emotionless Girl who's lost all hope because of Vendetta's reign. Voiced by Amy Winfrey.
Mort
A student added in the TV series. He has yet to have any speaking roles, and all he's done is shiver constantly. According to his Nick bio, he's extremely friendly and gives out nonsensical advice.
Ms. / Mrs. Minty
The substitute teacher in web episode 9. Shows up in the TV series as Mr. Milk's love interest. Voiced by Peter Merryman.