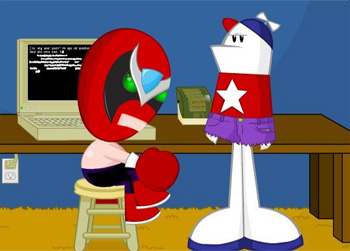 "Let's talk about your pants. Or your lack thereof. Daisy Dukes aside."
Homestar Runner: What are you talking about, Strong Bad? I wear long pants.
Strong Bad: Um... no, from what I can tell, you wear no pants and have blue soles glued to the bottoms of your feet.
— Strong Bad Email #127 "long pants"
Advertisement:

A technique in which cartoonists illustrate a character in such a way that their pants and shoes are one and the same. In the most extreme cases, their entire outfit appears to be one article of clothing, with thin black lines being the only illusion of separation. Used to make the color patterns more uniform and to eliminate the hassle of drawing dividing details.