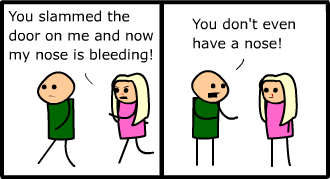 Cartoon characters, even human ones, aren't always drawn to the exact specifications of real life. This is done to give the characters a unique look, or for the sake of simplicity. A common form of Lampshade Hanging in animated cartoons is characters pointing out such oddities in their own designs, or the designs of other characters. This usually means Breaking the Fourth Wall, though it's possible for an example to merely lean on it.

Fourth-Wall Portrait is a Sub-Trope.