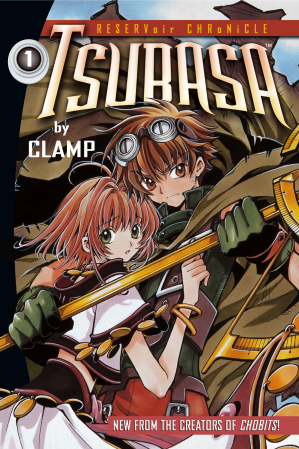 The story begins in the Kingdom of Clow, a somewhat-medieval desert world. Syaoran (see Spell My Name with an "S" below for other romanizations) is the adopted son of the deceased Adventurer Archaeologist, Fujitaka, and a dear childhood friend of Sakura, princess of Clow Country.

Just after Sakura decides to finally tell Syaoran her feelings for him, she's drawn to some ancient ruins on the outskirts of the city. After stepping on a symbol drawn on the floor, she seems to sprout ghostly wings, which then dissolve into feathers and vanish as Syaoran tries to save her. This causes Sakura to fall into an unwakeable sleep. The High Priest of Clow, Yukito, realizes that these feathers are the pieces of her soul. They have been scattered across the worlds, leaving Sakura an empty shell. In order to save her, he sends Sakura and Syaoran to the only person that can help her—Yuuko, the Witch of Dimensions. She agrees to help them, for a hefty price.

Two others have been sent to Yuuko. The wizard Fai D. Flourite has fled his home world after sealing away the god Ashura, and fears that Ashura will wake up for an unknown reason. His goal is to stay as far away from his home world as possible and never return. The Ninja Kurogane, on the other hand, is the opposite; he was banished from his own world for being too bloodthirsty, and his princess, Tomoyo, wants him to learn more about true strength before he can return. Frankly, he couldn't care less; he just wants to go home.

Yuuko tells them that the thing which all three have in common is a wish to travel between the worlds: Syaoran to search for the feathers, Fai to stay away from his own world, and Kurogane to search for his home. In exchange for their most prized possessions, she will grant them the ability to travel between worlds. Fai gives up his tattoo, the focus of his magical ability, and Kurogane his sword, while Syaoran must give up the memories that Sakura has of her relationship with him.

The retrieval of the feathers is made more difficult because the feathers, being fragments of Sakura's soul, hold huge magical powers. Whoever holds one is given strength that rivals that of the Powers That Be. And there is another force opposite Yuuko that attempts to intervene in their journey to fulfill its own desires...

Tsubasa has a sister series, ×××HOLiC, which focuses on the Witch of Dimension and her indentured servant, Watanuki. The plots of the two stories are deeply intertwined and characters regularly cross between the two.

The manga was originally serialized from 2003 to 2009 in Shōnen Magazine, ending with 233 chapters compiled into 28 volumes. There was an anime adaptation by Bee Train that ran for 52 episodes on NHK, as well as a movie, Princess of the Birdcage Kingdom, and two sets of OADs, Tsubasa: Tokyo Revelations (which follows the Darker and Edgier and Bloodier and Gorier storyline of the manga) and Tsubasa: Shunraiki (again, another supporter of said storyline). The movie and OADs were done by Production I.G. A sequel began serialization in August 2014, named Tsubasa World Chronicle, and Word of God has stated it'll be connected to ×××HOLiC Rei. It ended in 2016 and only released three volumes.

A word of warning, this series can be rather confusing. To understand how confusing, just see how many references there are to a certain trope all over this page.

Not related to Captain Tsubasa.