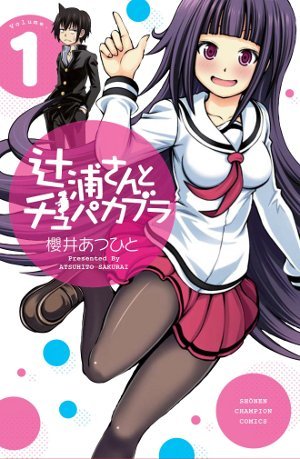 Don't try to understand her. You'll get a headache.

Kiritani Yuu isn't exactly what you'd call a popular guy: he's bored, without a friend, bullied, quite antipathetic, despised by his own sister, and occasionally called "the Invisible Man" for his utter lack of presence. So he's quite unfazed by the arrival of a New Transfer Student, a cute and frail girl named Tsujiura Megumi. That is, until he sees her being harrassed by a group of thugs… which she proceeds to wipe the floor with.

Turns out Tsujiura has transfered schools several times after getting constantly involved in fights, and just puts a demure image so that people will leave her alone. The problem is, that image also makes her insanely popular with the boys, which gets on her nerves: she thus asks Yuu, who knows her real nature, to be her "boyfriend" to fend off her numerous suitors. The poor Yuu will have to put up with Tsujiura's alien way of thinking, her passion for Unidentified Mysterious Animals (like the titular Chupacabra)… and a lot of pain.

Add to this the gang of Shimon, a heavy metal-themed thug considering Tsujiura his Arch-Enemy, and the former School Idol Tachibana Midori who wants to steal Yuu away from Tsujiura to humiliate her, and you get a leisurely-paced but slightly sociopathic romantic comedy, with an artstyle that may or may not be deliberately awkward. While the story doesn't spare us some clichés, it also likes to play with them, and the deranged characters eventually learn to be more sociable.

Written by Sakurai Atsuhito, Tsujiura-san to Chupacabra (subtitled "Unidentified Mysterious Girl") is a 4 volume series that ran between 2014 and 2015 in the Shounen Champion (which also hosted another insanity-fueled romcom).

Warning: since the series is pretty short, all spoilers are unmarked.

Unidentified Mysterious Tropes in this series