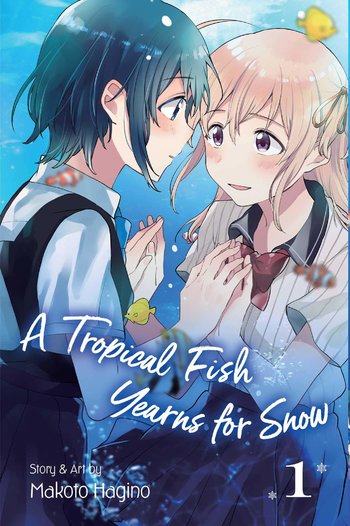 To the left, Koyuki; To the right, Konatsu
Advertisement:

A Tropical Fish Yearns for Snow (Nettaigyo wa Yuki ni Kogareru) is a manga by Makoto Hagino. It ran in the seinen magazine Dengeki Maoh from 2017 to 2021, and is licensed in English by Viz Media.

After Konatsu Amano's father transfers overseas for his job, she moves to a town by the sea in Ebisu Prefecture. While there, she meets an older girl named Koyuki Honami, who's well-respected as an honor student but like Konatsu, has no real friends. Koyuki also runs the Aquarium Club, which Konatsu ends up joining to satisfy the school's requirement for students to join clubs, and this is the story of the deepening bond between the two.