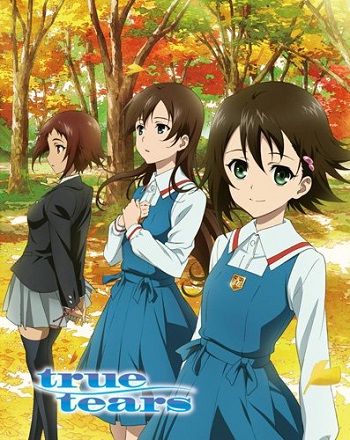 From left to right: Aiko Andou, Hiromi Yuasa and Noe Isurugi
"Because I gave my tears away."
— Noe Isurugi
Advertisement:

True Tears is a 2008 anime series produced by P.A. Works and directed by Junji Nishimura. Despite having the same name as the 2006 visual novel, it has a completely different plot, cast and art style. This article focusses on the anime, which follows Shinichiro Nakagami, a high school student who aspires to be an artist, and his relationship with Hiromi Yuasa, a well-liked girl from his school, after she moves in with them following her father's death.

Despite having known Hiromi for years, Shinichiro notes that she has grown cold and distant at home, despite being friendly and outgoing whilst at school. Shinichiro believes that she's just holding her tears in, and makes watercolours of her, hoping to eventually ease her tears. At school, Shinichiro runs into Noe Isurugi and runs into misfortune after teasing her, being coerced into performing Muhiga dancing. He subsequently reconciles with Noe, and as the two grows closer in the process, Shinichiro strives to help her recover her tears.

The anime is thirteen episodes in length, and was promoted by an internet radio show was hosted by three voice actresses from the anime prior to its release. Presently, the series has been licensed by Bandai Entertainment.