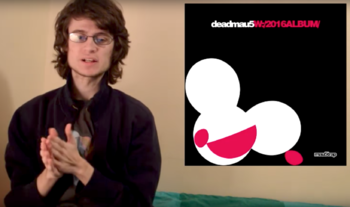 Review of deadmau5's "W:/2016ALBUM"
"Hello, everybody. Welcome to The Wonky Angle, where I talk about electronic music, both new and old."
Advertisement:

The Wonky Angle is a YouTube music review channel run by 256 Pi, real name Tommy Kaempfer (born October 19, 1995), running since July 2015. The channel revolves around, as the tagline says, Electronic Music, both new and old. Videos generally tend to fall into one of two categories; either reviews of recently-released electronic albums, or full album-by-album discography reviews of a single electronic artist, culminating in a Top 10 Best [artist] Songs list. There are other videos to be found as well; including CD collection showcase videos coinciding with the channel's anniversary, the occasional rant or thinking-out-loud video on something concerning the world of electronic music, a series of videos where he fills out an online March Madness-style bracket of one of his favorite electronic artists, a series of "worst to best" rankings of electronic artists and, at the end of every year, stepping outside the world of electronic music for Best and Worst lists of pop hits from the year prior, Todd in the Shadows or Spectrum Pulse style, as well as a list of the Top 10 best Electronic albums from that year.

TWA can be found here

. He also has two other active channels, made prior to TWA; 256 Pi Music

, the home of Tommy's original music (which can also be found on Bandcamp