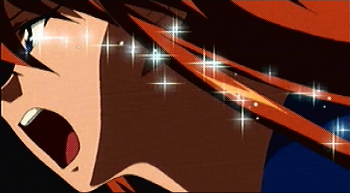 When a girl (or, occasionally, a sufficiently Bishōnen boy) has been upset and runs off while crying, the same mechanism responsible for Ocular Gushers ejects her tears with sufficient force that they become a visible trail in the air behind her, each one sparkling like a gem.

A Sub-Trope of Everything's Better with Sparkles.