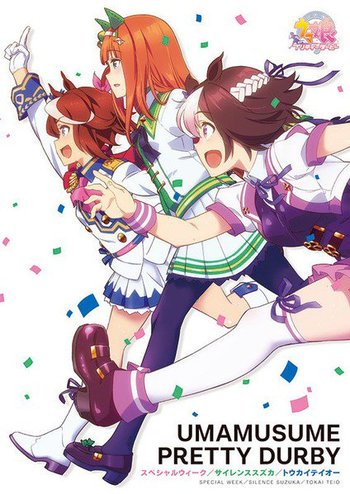 Named after the racehorses of a different world, the Uma Musume (ウマ娘, horse girls) dedicate their lives to running. For many of these young women, their biggest dream is to participate in the Twinkle Series, run alongside Japan's fastest, and shine on the winner's stage.

Special Week is one such horse girl. She strikes out from her small countryside home to make it at Tracen Academy, the premier school for aspiring racers. Despite being a newcomer to the competition, she hopes to become Japan's best horse girl. But in this new, competitive environment, will she stick to her guns despite the pressure and fulfill her lifelong dream?

Based on the mobile training game by Cygames, Uma Musume: Pretty Derby is P. A. Works' animated take on the horse girl racing scene.

On December 15, 2018, it was announced that the spinoff 4-koma Manga Umayon will be getting an anime adaptation, with it first airing on July 7, 2020. A second season was later confirmed in September 2020, and began airing in January 4 2021. The second season focuses on Tokai Teio instead of Special Week.