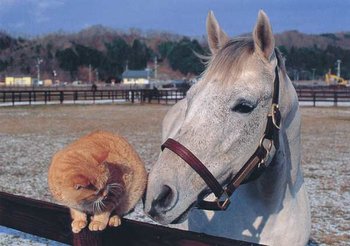 Oguri Cap: so tell me, kitty, you really think they will make me an anime girl too?! Eris: cert-nyan-ly!
Symboli Rudolf: Trainer never told you what happened to your father.
Tokai Teio: He told me enough! He told me he won the derby!
Rudolf: No Teio, I am your father. note in Real Life, Symboli Rudolf was indeed the father of Tokai Teio.
Teio: NOOOOOOO
Advertisement:

...and then there are also the magnificent grandparents: Maruzensky to Special Week, Mejiro McQueen to Gold Ship, and Sakura Bakushin O to Kitasan Black.

Haru Urara actually has an interesting family tree. Maruzensky's father Nijinsky also sired Haru Urara's mother. From her fatherly side, she counts Partholon (Symboli Rudolf's father) as an ancestor. Truly she was destined for greatness...

Even shipping in this game is influenced by IRL horse relationship! A recent support card depicted Seiun Sky and Nishino Flower together in a cute scene. IRL, they actually had a childnote Nishino Mirai together. This gets a bit gnarly when one takes a look at Nishino Flower's other mates...note she also foaled three children from Agnes Tachyon and two from Taiki Shuttle.