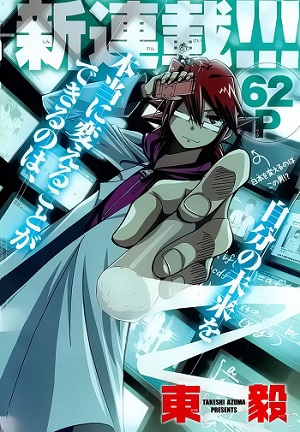 Ultimate Otaku Teacher (Denpa Kyoushi note lit. "The Ultimate Teacher") is a shonen manga series by Takeshi Azuma, which was serialized in Weekly Shonen Sunday from 2011 to 2017 and compiled into 26 volumes.

Junichirou Kagami is a 22-year-old Otaku who has no interest in the real world and buries himself in anime, manga and video games. Frustrated with his lack of ambition, his younger sister Suzune forces him to get a job as a teacher at his old high school. Though Junichirou is reluctant at first, he soon proves to be surprisingly capable at his new job, using unorthodox methods from his otaku knowledge to motivate his students.

The manga has an anime adaptation by A-1 Pictures which aired as part of the Spring 2015 Anime lineup, and ran for 24 episodes.

Tropes in Ultimate Otaku Teacher include: