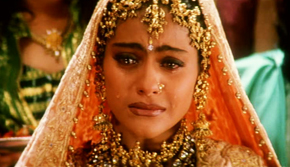 It's kind of like that.
"Eyes down, look sad. Don't smile! Indian bride never smiles. You'll ruin the bloody video!"
— Cameraman at Pinky's wedding, Bend It Like Beckham
Advertisement:

Are you marrying someone you do not love? Did your whole family just die? Is the best man planning to kill himself at the reception? And perhaps more importantly: is someone singing about it? If the answer's yes, congratulations on your Sad Bollywood Wedding!

Your family and friends will help you walk to the altar if you're sobbing too hard to walk. The camera will lovingly linger on your tears and possibly those of the one true love you'll never get to see again because your parents disapprove — but hey, maybe you'll sing a last song together and all the guests will join in to tell us how dangerous it is to fall in love... And why your groom doesn't take off is anybody's guess.

A staple of Indian romance movies, the Sad Bollywood Wedding is what happens when marriage and melodrama collide to make people who watch the movie cry so hard they can't see the screen anymore. Depending on the movie, the reason why the wedding is sad changes but you can expect amazing saris, tears, drama — and maybe a last-minute twist.

Truth in Television. Even without the Bollywood or some sort of lost love undertone, some traditional Indian marriage ceremonies are based on the idea that the bride leaves her family forever to live with her husband and his family (who are supposed to be total strangers to her). This often involves a lot of crying and even mourning on the part of the bride and her family. And in the old days, it was like this! People would come from another village, and it wasn't like mom and dad had a car to go visit the daughter. If you were poor, you might see your daughter when she has kids and that's it. In some more traditional families, the bride's parents won't even eat or drink water from the daughter's new home.