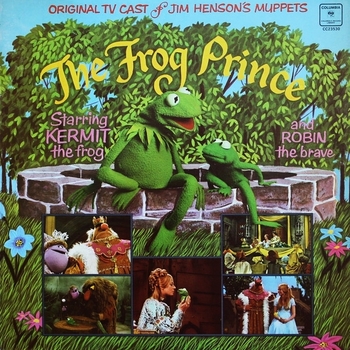 The Frog Prince (released on home video as Tales from Muppetland: The Frog Prince) is a 1971 Muppet special produced and directed by Jim Henson. It's a Spiritual Successor to Hey Cinderella!, similarly taking a classic fairy tale (The Frog Prince) and presenting it with a Muppet cast, though this special is a more straightforward retelling than its predecessor.

Kermit the Frog acts as the on-camera narrator and also plays an important role in the story. One day while hanging out with his frog buddies, Kermit meets a tiny frog who says his name is Sir Robin the Brave. He explains that he's really a human prince (with a flashback showing him in his human form, played by Gordon Thomson), but a witch named Taminella Grinderfall turned him into a frog For the Evulz. The only way to break the spell is to be kissed by a princess, and Robin sees an opportunity when he meets Princess Melora (Trudy Young), daughter of dimwitted King Rupert the Second. Melora was also struck by a spell from Taminella, which left her only able to speak in Spoonerisms. But Robin and Kermit will have to tangle with Taminella and her sidekick, a vicious ogre named Sweetums.

After debuting in this special, Robin and Sweetums would go on to become memorable parts of the Muppet ensemble starting with The Muppet Show, with Robin Retconned as Kermit's nephew.

"The Frog Prince" contains examples of the following tropes: