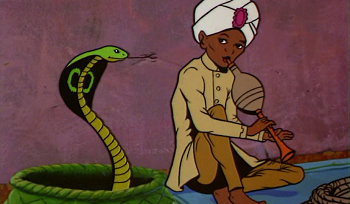 An inseparable part of any Mystical India setting (and in many Middle Eastern and North African settings too, especially Egypt), the snake charmer — invariably depicted wearing a turban — sits in a Lotus Position and plays an oriental-sounding melody on his pungi, hypnotizing a snake sitting in a wicker basket. More than just mere street performers, they often have the ability to exert complete control over any snake with their Mind-Control Music — or, for that matter, over any animals or objects that vaguely resemble snakes, such as vines or ropes. In more comedic settings, any character can spontaneously acquire a snake charmer's abilities simply by grabbing a flute and putting on a turban.
Advertisement:

Note that despite a common misconception, real-life snake charmers don't literally hypnotize the snake with their music. Snakes can't hear the melody since they lack an outer ear (though they can sense the vibrations made by sound), and they aren't being hypnotized, either. What really happens is that the snake perceives the movements of the performer and his flute as a threat, and assumes an upright, warning stance, tracking the end of the flute as if it was the head of a rival snake.

A subtrope of Magical Flutist. As snakes are sometimes depicted as having Hypnotic Eyes, this can be considered an inversion — or a case of Beat Them at Their Own Game. Compare Music Soothes the Savage Beast.