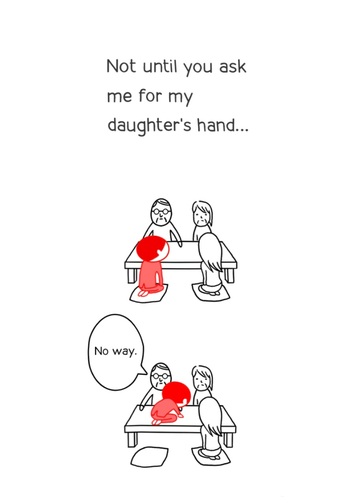 No wonder why his father-in-law refuses the blessing for them, although he manages to do the Pose of Supplication.
"Can I have your daughter for the rest of my life?
Say yes, say yes, 'cause I need to know.
You say I'll never get your blessing till the day I die.
'Tough luck my friend, but the answer is no!'"
— "Rude", MAGIC!
Advertisement:

You are a grown adult. You've found your true love, and they love you back. You want to get married. Everything's great, right? Wrong! Your parents are convinced that you've picked the wrong person, and will do almost anything to prevent the marriage.

This is different from an Arranged Marriage. Your parents don't want the right to pick your spouse. They just want to veto your choice. In some societies, your parents may have a legal right to such a veto.

But all is not lost. If you and your true love can stay true to each other, and be persistent, your parents will eventually notice your true love's good qualities, and will change their minds. Alternatively, you may hear the words "I Have No Son!" (or daughter, depending) addressed to you in no uncertain terms.

Sometimes, it will turn out that your parents are attempting to see whether or not your feelings are genuine. If you cannot overcome the obstacles put up by your parents, then they were wise to delay things. If you and your true love find a way around the obstacles, then that's becomes proof that it really is true love.

In rare cases, your parents are right. You really have picked the wrong person to marry.

If you are in a Fairy Tale or a Fantasy story, your parents may give your true love an Engagement Challenge.

In extreme cases, your parents will be not be above Offing the Offspring. In appropriate settings, they may instead take the slightly less drastic step of packing you off for Taking the Veil. You may have to fight in order to be together.

Even though most people in the western world choose their own spouses, this isn't a Dead Horse Trope. It can still appear in historical fiction, fantasy, in stories not set in the western world, or in any story where parents believe that they have a right to meddle in their grown children's lives. Contrast Child Marriage Veto. See also Love-Obstructing Parents, Dating What Daddy Hates, Meet the In-Laws, and Wedlock Block.