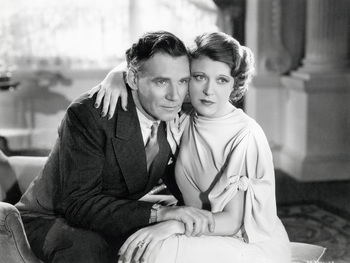 Dodsworth is a 1936 drama film based on a novel by Sinclair Lewis, directed by William Wyler and starring Walter Huston in the title role.

Sam Dodsworth is an auto magnate who, at the start of the film, has sold his automobile company and retired to a life of leisure. The whole idea came from his wife Fran (Ruth Chatterton), who is younger than Sam but herself middle-aged and bored with life in the small town of Zenith, Ohio. Sam appears to have mixed feelings about a trip to Europe but indulges Fran.

The Dodsworths board the boat to London, where Ruth immediately starts flirting with an officer (played by a young David Niven) but breaks it off when he starts to get serious. On the same voyage Sam strikes up an acquaintance with Edith (Mary Astor), an American divorcée who lives in Italy. In London, Fran starts getting obsessed with the European sophisticates she hangs out with, and more and more embarrassed with her plainspoken, unpretentious Middle American husband. She demands that he go home and let her tour Europe alone. He does so, and she proceeds to embark on an affair with a German playboy (Paul Lukas). Sam finds out, goes back to Europe, confronts her, and promptly forgives her. However, she embarks on a new affair with a German nobleman, and demands a divorce. A heartbroken Sam crisscrosses Europe alone—until he runs across Edith in Italy.