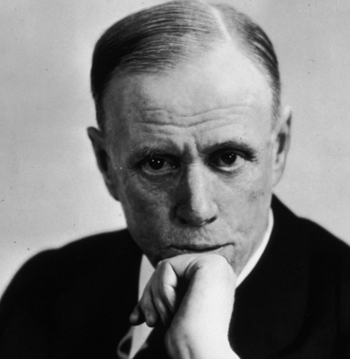 "It is impossible to discourage the real writers - they don't give a damn what you say, they're going to write."
Advertisement:

Harry Sinclair Lewis (1885-1951) was an American author and the first American winner of the Nobel Prize in Literature. (He also won a Pulitzer Prize, which he rejected). He achieved fame for his satiric portrayals of American life. His novels Main Street, Babbitt, Elmer Gantry and It Can't Happen Here remain well known, though many of his other novels remain in print as well. The film Dodsworth is based on one of his novels. "Little Bear Bongo", which he wrote as short story for Cosmopolitan magazine, was adapted by Walt Disney in 1947 as a segment of the animated feature film Fun and Fancy Free.