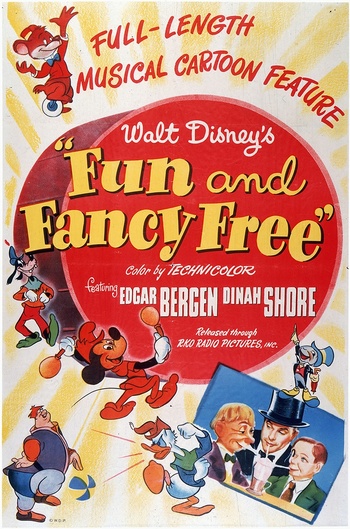 Released in 1947, Fun and Fancy Free is the ninth film in the Disney Animated Canon.

The movie is a "package film", consisting of two shorts that were each originally planned to be full-length movies in their own right, but due to situations at the time, had to be cut short and put together in this one movie.

The two shorts are:

The shorts are tied together with a framing story starring Jiminy Cricket from Pinocchio, who sets up a record player that plays the first story with narration and songs by Dinah Shore, and then attends a birthday party where the second story is told by Edgar Bergen and his puppets Charlie McCarthy and Mortimer Snerd to child star Luana Patten. Mickey and the Beanstalk is by far the more well known of the two shorts, being actually more well-known than the movie itself.

Unlike most other Disney animated features from before the age of home video, this was never given a theatrical re-release. Sometimes, however, the individual segments were each tacked onto another Disney release and/or aired on television, usually as part of episodes of the Disney anthology series. While Bongo was usually left unchanged, albeit with Jiminy Cricket himself replacing Dinah Shore as narrator, Mickey and the Beanstalk's solo releases were mostly based on a Wonderful World of Color episode where they had replaced the narration by Edgar Bergen and his dummies with one by Ludwig von Drake.

Mickey very nearly talks Willie the Giant into turning into a housefly; unfortunately, Willie insists on changing into a pink bunny instead, upon which he notices Mickey, Donald, and Goofy going for the giant flyswatter.

Example of:
Tricking the Shapeshifter

Mickey very nearly talks Willie the Giant into turning into a housefly; unfortunately, Willie insists on changing into a pink bunny instead, upon which he notices Mickey, Donald, and Goofy going for the giant flyswatter.