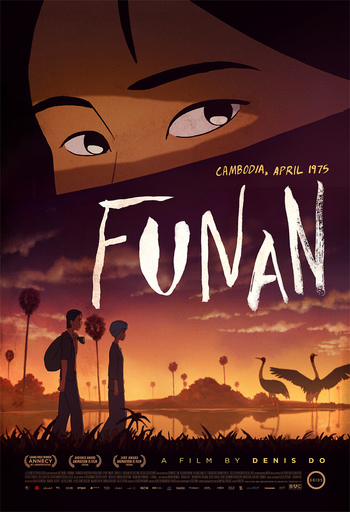 Funan is a 2018 French-language period drama animated film directed by Denis Do.

It is set in Cambodia in the year 1975, during the beginning of the Khmer Rouge revolution. The movie centers around Chou, a young woman whose son got separated from her during the forceful evacuation of the citizens from Phnom Penh. Other characters include her family, such as her husband Khuon, her brother-in-law Meng, her mother, her grandmother (who went after her son and as a result, she is separated from them as well), and their other children Hout, Tuch, and Lili. What follows is a series of hardships forcefully implemented on them by the regime such as working in labor camps where they work to the bone with barely any food to the point of exhaustion and illness. But through it all, Chou and Khuon never stop looking for their son.

The film is based on the director's own research and the memories of his mother, on whom the main protagonist, Chou, is based.

Compare the live-action movie First They Killed My Father, in which it is set in the same year and also deals with the Khmer Rouge regime, but from the point of view of a child.