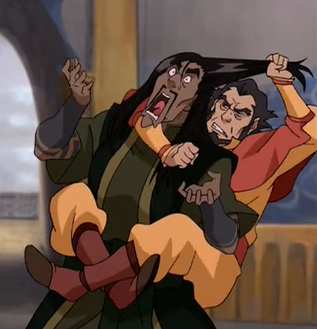 Lemme help you with that cowlick.
Josh Matthews: Well, it's against the rules.
Bill DeMott: Is it Doug Basham's fault for grabbing the hair or Rob Van Dam's for having it?
— WWE Velocity, Billocity!
Advertisement:

A close cousin to the Standard Female Grab Area where, if whoever it is can't grab hold of the woman's wrist or upper arm, they'll just grab onto her hair instead. Obviously a lot more realistic than a wrist being the weak point, as anyone who has had their hair pulled can vouch for how painful it is. While this typically happens to long-haired women, it can apply to anyone with enough length to grab — even a man's hair or beard (though male examples are rare outside of Professional Wrestling).

It can be played for comedy or drama, depending on the situation. Hair pulling is almost obligatory in a Cat Fight, but may be less common in a Designated Girl Fight as Action Girls tend to rise above such cheap tactics. If it's happening to a mean girl, then it might cause a Hairstyle Malfunction if she's wearing extensions. Vain characters will react strongly to having delicate or elaborate hairstyle ruined in this way. If the girl happens to be badass, then expect her to sometimes overcome this problem by cutting the hair off at the point where it's being held. See also Life-or-Limb Decision and Giving Them the Strip. Truly dark examples can combine this trope with others like Slashed Throat and Off with His Head! where the vulnerable head and neck becomes easier to exploit when it is restricted in this fashion — the grip also lends itself perfectly to making a Decapitation Presentation. This trope can fail as an attack if attempted on someone whose long hair is actually a removable wig or toupee, although emotional effects like distress or rage might be inflicted if the said target was seriously attempting to maintain a facade of having a good head of hair and end up being exposed by this trope.

Covers the classic "caveman dragging a woman by the hair" bit — the man finds a mate by clubbing her over the head and then dragging her off to his cave by her hair. For the record, while hair pulling is painful, the commonality of the "dragging her around by the hair" bit in film and television is because it's fairly easy to stage and relatively painless. Notice that when the man grabs her by the hair, she immediately grabs onto his wrists. Usually at this point, the puller lets go of the hair, and instead drags the woman around by the arms instead. All the kicking and screaming? She's usually digging her heels into the ground for leverage and trying to help him by making herself lurch ahead.

Note that historically, long hair was not as much of a disadvantage as it is sometimes portrayed. In a real fight, unless one side is completely unarmed, there's much better ways to attack an enemy than grabbing their hair, especially if the opponent is armed. For that reason, hair grabbing is often a tool of last resort or a dirty fighting move while both combatants are unarmed.

Hunter's palisman Flapjack has a habit of pulling on his forelock whenever they want him to do something.

Hunter's palisman Flapjack has a habit of pulling on his forelock whenever they want him to do something.